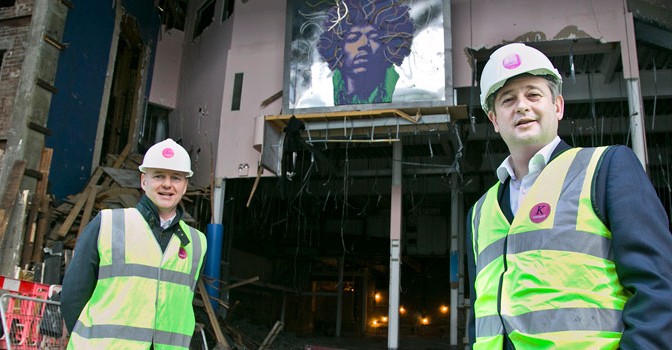 Demolition works have begun on the rear of The Capitol as part of its £30million plan to redevelop the iconic building on Union Street, Aberdeen.

Part of the process will be by hand, due to the close proximity of adjacent properties, with other sections being removed by mechanical means. More than 90% of the demolished materials will be recycled and diverted from landfill to meet with BREEAM guidelines.

Aberdeen City Council approved the commercial property developer’s plans in September 2013 for the restoration, renovation and extension of the building to create prime office space for up to 700 personnel, covering approximately 75,000 square feet.

The new development will go towards meeting the current demand for commercial space in the city centre and is on track for completion in late 2015.

“The building has been in a state of disrepair for five years. Starting the demolition works is a milestone in the redevelopment and we are working closely with our contracted partners to ensure that the iconic structure is brought back to its former splendour.

“We have planned the process accordingly and consulted with Historic Scotland to ensure that the process it is carried out with the utmost care and attention. We are proud that more than 90% of the demolished debris will avoid landfill.”

As part of the redevelopment, Knight Property Group will install an escalator to link the refurbished art deco front of house with the new-build office development to the rear, designed to incorporate stonework, glass and curtain walling.

The exterior of the building fronting Union Street will be restored, paying specific attention to the former canopy, signage and stonework.

“I’m pleased that Knight Property Group is playing a role in the regeneration of Union Street and we hope that this is the first of a number of significant projects to go ahead in the city centre. I believe that we must offer companies the best options to accommodate personnel otherwise we are at risk of them looking elsewhere and losing valuable contributions to Aberdeen’s economy.”

Knight Property Group gifted the original Compton Organ to Aberdeen Theatre Organ’s Trust late last year and it was removed from the theatre, piece by piece. It will be re-homed and displayed to the public at a, yet to be decided, Aberdeen location.

The building is being developed on a speculative basis and is currently the largest city centre new-build office space under construction. The space can be tailored to accommodate individual business requirements, from 5,000 sq ft up to 75,000 sq ft.